The biggest! The weirdest! The craziest! Etc etc etc 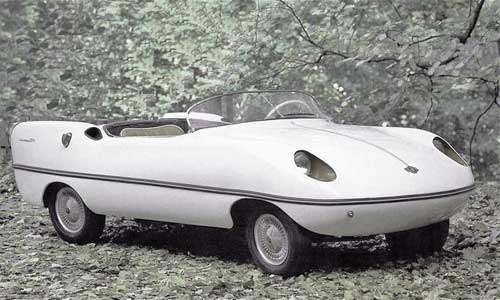 Need to go faster? Get out and run!!

The Goggomobile minicar was a huge success in Germany when it was introduced in the late 50s. The principal reason for this was it's sheer reliability; it came originally with a 250 cc rear mounted engine churning out just 13 brake horsepower, which propelled it to a top speed of just 52 miles an hour; but it was cheap, easy to maintain and carried a driver and passenger in relative comfort, considering its small size (it was in fact first introduced at a cycle and motorcycle show, not a car show!)

Then there were changes!

An Australian gentleman named William Buckle bought the rights to produce the Goggomobile in Australia. Not content with continuing with a tried and tested car, he decided to just use it as a basic template, and design a completely different vehicle himself. The result was the Dart.

Well the original vehicle may have been tiny, but Buckle made it tinier still. It became an open topped sports car, only 3 feet in height. Because it was so short Mr Buckle decided that doors were completely unnecessary and that drivers and passengers could simply step into it. This was not terribly popular with a lot of ladies; it was not a very dignified way of getting into a car.

The car had either a 300cc or 400cc two-stroke engine. Which ever engine was chosen, it was underpowered by most standards and the maximum speed was a miserly 62 mph. Acceleration was woeful and the noise levels inside the 'car' were way beyond tolerable when it was hard pressed.

What was it made of?

The original body in the German Goggomobile was of pressed steel, which gave the vehicle a certain rigidity, but Buckle decided to change this for fibreglass. This reduced weight considerably but not only gave far less protection to driver and passengers but also increased flexibility. Some unkind commentators suggested that the reason why there were no doors was because body movement would cause them to either refuse to close or flip open at the wrong moments - completely incorrectly, obviously.

Pretty awful. The steering was extremely sensitive and some found it easy to get into difficulties by over-compensating; an easy error to make in such a light car with a rear engine. Over anything less than a glass plate-smooth road it felt like driving over corrugated iron. However the jarring at least took the mind away from the banshee-like scream of the engine. There was nowhere to put luggage and no protection from the rain unless a fold-up roof was purchased as an optional extra. Using this could prove very interesting since, in the absense of doors, there was no way for the occupants to get out unless it was first lowered.

Did it sell well?

Despite the drawbacks it was a very attractive looking car and many owners loved it. Not many were sold; perhaps 700 or so; but commercially it was successful - just.